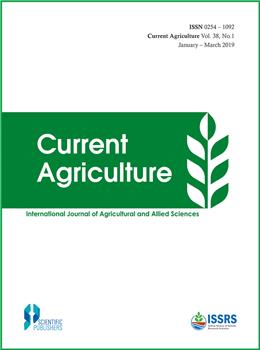 Thiourea is a sulphatral compound containing -SH group which has been considered responsible for various physiological and molecular activities in plants. Application of thiourea as seed treatment and foliar spray has been reported to enhance photosynthetic efficiency, transport of assimilates to grains and harvest inter in a number of crops such as wheat, pearl millet, maize and legumes. Thiourea has been found to delay leaf scensace, chlorophyll degradation and act as scavenges for ROS species such as H2O2 and superoxide. There effects have been attributed to enhance seed yields, dry matter accumulates on harvest index and water use efficiency in different plants under the rainfed conditions. Recently thiourea has been found to impart water Indian in beneficial mustard and maize under saline conditions. The salt tolerance effects of thiourea have been associated with its role at physiological and molecular levels encomposting photosynthetic efficiency, nitrogen metabolism,antioxidant defence and stress tolerance under water limited conditions. Furthermore, it has shown additive effects with P and N nutrition on plant growth and leaf metabolism.

Biochemical Perturbation in Response to Arsenite Exposure in Bacteria

Arsenic is a toxic metalloid enormously found in the environment causing health hazardous effects. Human anthropogenic activities and industrialization contribute to increasing levels of arsenite in the environment. Both the form (arsenate (AsV) and arsenaite (As III) disturbs cellular activities and, since the structure of arsenate is similar of phosphate it get inside the cell by phosphate transporter ultimately amount of phosphate is reduced. Microorganisms have developed diverse mechanisms for detoxification and resistance. Oxidation, reduction and methylation mechanisms are in the main to cope up with metalloid arsenic. When arsenite is injested into the cell, it`s cycling leads the development of reactive oxygen species. Thus, in an occurrence of arsenite in the cell, activities of different antioxidative enzymes (catalase, peroxidise, glutathione Stransferase and superoxide dismutase) are found to be increased. This review focuses on mechanisms concerned with arsenite tolerance and management of this toxic metalloid for a sustainable environmental system.

Occurrence of Boron in Irrigation Waters, Soils, Drinking Waters and Its Detoxification

A diallel set of 7 parents and their 21 F1 hybrids were analyzed to understand the nature and magnitude of gene action and to identify the best combiners for yield and its component traits of lentil (Lens culinaris L.). Thevariances due to gca and sca showed that gene action was predominantly additive for days to flowering, days to maturity, plant height, 100-seed weight and seed yield/plant and no-additive gene action for number of branches/plant and number of pods/plant. Estimates of gca effects showed that the parents RKL 1001, RKL 11 and LL 1049 were the best general combiners. Thus, the early maturing parents RKL 1001 and ‘RKL 11’ and collar rot and black aphid resistance parent LL 1049 should be involved in the hybridization programmes for making yield breakthrough in lentil. The cross RL 3 x IPL 313 showed significant and desirable sca effects for yield and its most of the component traits

Assessment Of Land Use, Its Changes And Impacts In Siwana - Pachpadra Region Of Arid Rajasthan

Land use keeps changing with time through human intervention influenced by their needs and choices. Arid western Rajasthan in recent past witnessed enormous changes in land use by creating irrigation potential through sinking more wells and canal irrigation; cultivation of cash crops and mining of minerals and oil. Based on the interpretation of topographical maps, satellite images, long  term land records data and limited field check, the land use changes in Siwana-Pachpadra region in Barmer district of Rajasthan are assessed and mapped. During the period from 1983–84 to 2017–18, the net area sown as well as irrigated area had significantly increased while the area under fallow land and culturable waste land are sharply declined. More emphasis is given to irrigated cash crops viz. wheat,mustard, cumin, isabgol etc. However, with overexploitation of ground water by sinking and deepening more tube wells,the irrigated area along the flood plain of Luni river and in alluvial plains had declined while new irrigated areas have come up in interdunal region in southwestern part of the region around Padru. Acreage and production have specifically increased under irrigated rabi crops while rainfed bajra and sesame crops have shown declining trend. Effluents emanated from textile dyeing and printing industries around Balotra-Bithooja and Jasol become a great menace causing environment and ground water degradation.Creation of mine spoil areas in another environmental problem. Drivers of land use change and its environmental, economic and social impacts are examined and strategies for integrated development of agricultural resources are highlighted

The Oilseed Brassica is second oilseed crop after groundnut in terms of area and production in India. These crops have been known to be attacked by several pathogens resulting in huge losses in yield. Alternaria brassicae (Berk) Sacc. causing Alternaria Blight is the major pathogen of the crop. A field experiment was conducted during rabi season of 2011–12 and 2012–13 at Pantnagar, Uttrakhand in augmented block design to study the evaluation of 480 B.juncea accessions for resistance/tolerance against Alternaria Blight disease to search resistant/tolerant sources or improved materials as such which have high yield potential. Study found none of the accession showed resistant reaction towards Alternaria blight on leaves during 2011–12 and 2012–13 crop seasons. Accession no. 491314 showed highly resistant reaction with minimum disease index on pod (12.45%) during 2011–12 cropping season.

Comparative Effects of Water And Salt Stress On Plant Growth, Development And Photosynthesis

Increasing grazing pressure on the available land resources and continuous shrinkage and over-exploitation of grazing lands causes deterioration of arid ecosystem. In Rajasthan large area (0.38 mha) suffers from problems of salinity and alkalinity; and its rehabilitation through biocorrective measures is required. A field trial with Sporobolus diander and Cenchrus ciliaris on highly degraded shallow, waterlogged salty area in Jodhpur, Rajasthan showed that plantation improved the soil properties and grasses could be established. Raised soil structures assisted in establishment of even non salt tolerant grass. The mean grass yield was 754.6 g/m2 for S. diander and 600 g/m2 for C. ciliaris. Soil structures significantly influenced the grass yield and it was 906 and 894 g/m2 for the platform and slope soil structures respectively as compared to control 465 g/m2 for S. diander. In case of C. ciliaris, slope was the best structure with 1104 g/m2 yield which is 6.5% times more than control (169 g/m2) indicating the positive effect of salt leaching. Soil conditions improved and many other grasses also appeared in the experimental area such as C. biflorus, Bracharia ramose,Dactyloctenium sindicum, D. agypticum, S. helvolus and C.virgata.